D and I drove up to Leduc on Saturday morning. We checked into our hotel, changed into some workout gear, then headed off to the race site to do a little prep work. The bike is a two loop course, so we rode through it once, just to see what it was like. Quite flat, but loads of wind… We were hoping that it wouldn’t be so windy on race morning! On the way in it seemed like I caught a bug in my mouth. I turned my head to spit…while in aero…and nearly bit it. Note to self…don’t turn head to spit while in aero!

For dinner we went to Olive Garden. It seems to have sat well in my stomach for both Great White North and Lake Stevens, so why not? The restaurant was busy, so we hung out in the bar for a bit. 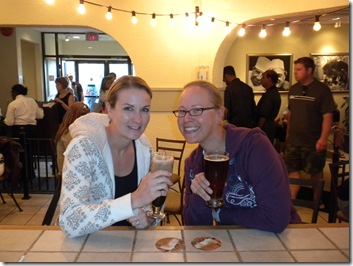 A pint of Big Rock Traditional Ale, salad and breadsticks, plus the Capellini Pomodoro with chicken…dinner of champions I tell ya! We went back to the hotel where I helped D run through a transition practice, we watched the end of Mean Girls, and I was asleep by 10 pm.

We were up early and ready to go. We had made the decision to pick up our packet race day since it wasn’t convenient on Saturday. The only thing we wouldn’t know was our swim time. Apparently heats ran from 8:10 to 8:45. We ate our breakfast at 6:30, then headed to the race. Imagine our surprise when we got to the race and D’s swim heat was 9:45 and mine was 10:25! I got hungry as the race approached, but luckily I had a peach to eat, plus I took a gel just before the swim. I stuffed another gel in my bento box on the bike just in case. Finally my heat was up and it was go time! 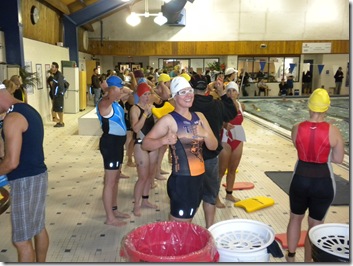 I had gone to the pool to crank out 750m on Friday so I had an idea where my time would be at. 16:40. I lined up in the back of my other lane mates tagged at 16 minutes and got in the water. In no time at all the girls in front had pulled ahead so it was just me. I made sure to just focus on my stroke – being efficient and powerful. I felt good throughout the swim. The girl in front wound up lapping me and I tried to hang on to her toes for as long as possible. All of a sudden my swim was up! We exited on the deep end of the pool. Not sure why, but I always forget how to get out of the pool during a race. Let’s just say my exit was less than graceful. Race day adrenalin must be an amazing thing because:

Why is it so hard to put socks on wet feet? Despite this being a sprint I didn’t want to take any chances with blisters, so socks it was! I was methodical in getting through T1, took the bike of the rack, and ran out. 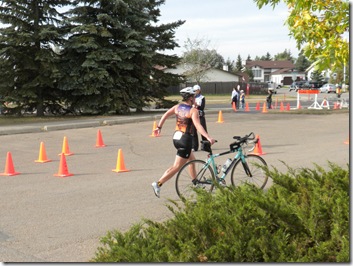 I knew my chance to be strong on this race would be on the bike. I’ve been riding quite powerfully on the flats lately so I was keen to have a good ride. As soon as I started riding it was…SMACK..in to the wind. It was brutal! I just got down into my aero bars and tried to pedal away. At first I had a tough time finding a good gear to be in. My small chain ring felt too easy, but anything in my big chain ring felt too hard. Ideally I would have like to have aimed for a 90+ rpm cadence. But here’s a secret…I’ve been riding blind without a bike computer since the end of July. The cadence stopped reading on a Tuesday night ride and the speed stopped reading that weekend. I wasn’t too concerned about replacing it before Lake Stevens but it would have been useful for today. I had a good idea of what 90 rpm felt like, so I just went with it.

I was passing ladies all over the place on the bike. Anytime I went past someone I yelled out, “Great job!” When I hit the turnaround on loop 1 the wind was at my back. Go time! My average pace went from 16.3 mph to 18.3 mph. Good times! This was a double loop course though, so it was back out into the wind. As my brain was telling me how much I hated the wind I tried to change my train of thought. I didn’t hate the wind, I loved it! It was me against nature and I felt awesome! It kind of worked actually. When I hit the turnaround again and had the nice tail wind I told myself that it was go time and time to drop the hammer. It was awesome! Back at transition before I knew it, and I was never passed on the bike. Very happy with my ride!!

Bike racked, bike shoes off, running shoes on, grabbed my visor and put it on as I ran out of transition.

The goal for the run was just to see how fast I could run and to hold on. The run was also a two loop, out and back course. The way out was okay. I was afraid to look down at my Garmin in case the number scared me and I back off. And then at the first turnaround I did. Oops. The way back had a VERY slight uphill and I could really feel it. Plus I was running into the wind now. Uck. 5Ks hurt. D was done with her race by the time I was done on the bike, and it was great to hear her cheering me on as I finished up the first lap. 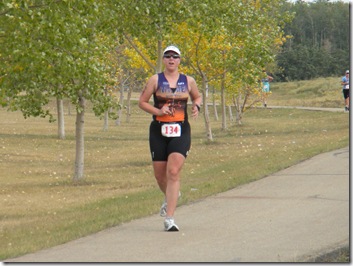 Lap two I was fading. Why did I look down at my Garmin? I admit I had a couple of short walk breaks to try and bring the heart rate back down. As I was nearing the end of lap two I passed a girl heading out and she just looked at me and said, “Crap, you are fast!” I didn’t feel fast, but what she said totally made me smile. This wasn’t going to be a PR for me, but no worries, it wouldn’t be too far off. I felt perilously close to a post finish line barf…but somehow I held it in. The run was done! 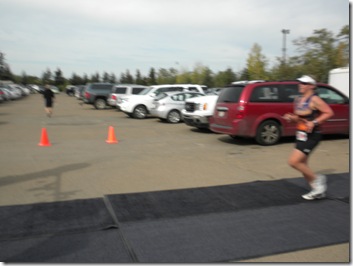 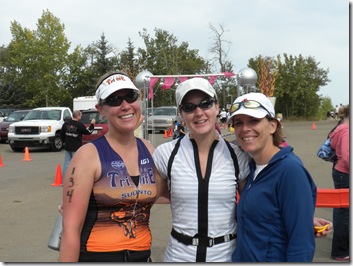 So…here’s the deal…part of the reason why I’ve been beating myself up about my crappy runs this week was because I really wanted to do well at this race. My super secret…how amazing a day it would be…goal would be to see if I could get a top 3 in my age group spot. When I realized what time I’d need to pull off (looking at last year’s results), and that the age group went in 10 year increments instead of 5 I figured my chances would be slim. I figured that as long as I raced well I’d be happy. And I was super happy with my swim, bike and run. Mission accomplished!

I showered and changed, then found some preliminary results. I was floored…but not all the racers were in yet so I wasn’t sure my placing would hold up. D and I waited a bit longer for final results and the awards ceremony. So how did I do??

I am blown away! I never thought it was possible to pull off that amazing of a PR and win my age group. I went up to collect my award (a gift card for Element Multisport in Edmonton) and D snapped a shot. Just as she was taking the picture the race director says to me, “I hate having my picture taken, don’t you hate having your picture taken?” Nope, not when this is my first time getting an award!!! 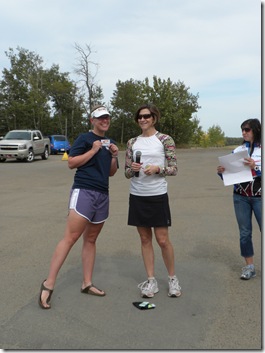 After that D and I packed up the car and stopped off at White Spot for a celebratory beverage and some lunch. Talk about an terrific weekend! Not only am I super happy about my race, I am very happy that I was able to race with D. She rocked her first tri, and thanks to the staggered start we were able to see each other more on the course than otherwise. I was so glad to share this race experience with her! Love your blog. You write excellent reports, makes me want to race tris as well! Excellent job, that's all I can say!

Nice work Leana! 1st in AG?! Woot! You were so strong out there, esp. on the bike! Congratulations!!!

Congratulations! You are awesome!

*Cheers wildly* That is SOOO awesome!!! You go girl!

You seriously just started tris a year ago??? I must have misread somewhere. You rock!

WOW! Congratulations!!!
(and i love the new blog look)

Congrats again! You rocked it.

BTW, I know what you mean about race day adrenalin... I probably would have had a hell of a time getting out of the pool at the deep end. And congrats to you on pushing your bike out of transition like you did.... I can't do that! :)

PS- does the 5k time include transition or something or should it really be 27:xx?

Woohoo!!! Congrats! I'd stand there and get my pic taken for that. Your buddy D looks awfully familiar.

Way to go! I'm as impressed with the 12th overall as with the #1 AG placing! Awesome improvement :-D

OMG - you WON your age group??? That is amazingly wonderful, Leana! Congrats!!!

I'm also impressed with you being able to run your bike out while only holding the seat. How do you do that? How does your front wheel stay straight?

Congrats on a great race!

yeah buddy! 1st place!! niiice job! i am so proud :) sounds like the bike part went extra well and i'm glad you held onto your cookies in the run. huge pr there from last year i see. congrats!

You're such a rock star. Congrats!

Now THAT's how you rock a tri!! Damn nice times on everything.

Great work Leana! You look so fit and strong in your pictures, all of that hard work and training is paying off! Congratulations on first place in your AG too!

PS - I love your new blog look!! So exciting to have such a huge goal!

Awesome - CONGRATS on the win!!

Wow, you were just awesome on all three sports. Great strategy on the bike & run too. Way to go on the AG win!

Join in on the Holiday Bootie Buster Challenge!

Off to the Races!

Blogging Since April 2007 - The Archive